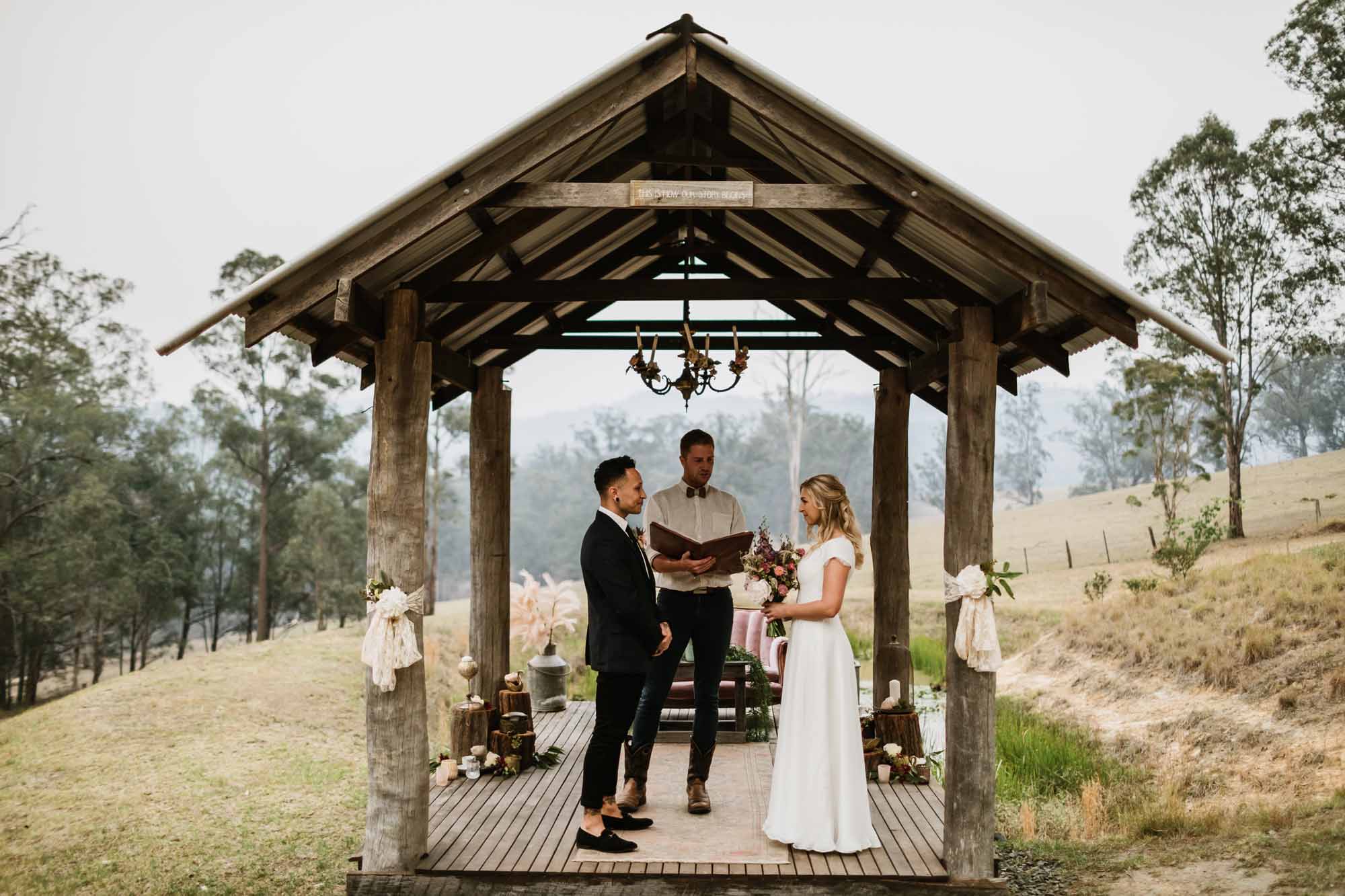 Country elopements in Australia just don’t get any better than this. Rolling hills, dirt roads, farmlands and a beautiful rustic setting on a private property. Beth & Damien eloped to the Hunter Valley in New South Wales… just the two of them. For a stress-free, fun and beautifully intimate elopement.

The amazing country elopement venue featured here is Goosewing Cottage in Mount View, with photography by Cavanagh Photography. And if you are looking to elope in a rustic, country setting, then this elopement should give your plenty of inspiration.

“It’s probably the most romantic thing we have ever done.”

You will notice that the photos in this elopement look smokey, hazy and almost have a red glow to them. That is because this elopement took place during an unprecedented period of bushfires in NSW and around Australia.

This is how Beth & Damien’s love story began…

“We met at a house party in January 2015. We saw each other from afar but didn’t chat until later on in the evening when we had a few drinks in us haha. We talked all night and exchanged social media accounts.
Damien proposed a day after I received my Australian permanent residency (four days before my birthday) in August 2019. He was already taking me out for a birthday dinner so it worked out great for his planning. After dinner, he acted like he was taking a selfie of us, with the ocean in the background, however, it was actually a video and he pulled out the ring.”

The location for this elopement was Goosewing Cottage in Mount View. Mount View is one of the lesser-known areas in the Hunter Valley, but it is probably one of the most spectacular locations. It is located between the towns of Cessnock and Wollombi in New South Wales and it is a land full of mountains, hills, rural pastures and charming homesteads. It is far less crowded than areas like Pokolbin and it is just beautiful!

Goosewing Cottage is a private property with two accommodation options onsite. A large ‘homestead’ and a smaller ‘cottage’. And they specialise in creating beautiful elopements.

Deciding to elope is always a very personal decision for every couple. And the reasons vary greatly. Beth is from England and they chose to elope because they knew some of Beth’s family would not be able to make the journey to Australia for their wedding.

“I said that I didn’t want anyone if I couldn’t have everyone. We also wanted a stress free and affordable day”

“We wanted a marriage, not a wedding 🙂 “

“Once we decided (which was two days after the proposal), we called each of our parents and told them our plans. They were over the moon and thought it was genius! We didn’t tell anyone else at that time as we wanted to keep it a surprise. We held an ‘engagement’ party a couple of days after we got married and announced it then to mostly everyone’s surprise.”

They eloped on Thursday and told everyone on Saturday!

“We spent a week looking all over the internet. We thought about eloping in NZ and TAS but then we found out that if we were to get married outside of Australia, you have to pay to have your marriage recognised in Australia. After further discussion, we agreed on NSW. We had a few options in NSW but Goosewing Cottage definitely stood out the most. The top package was everything we wanted and more as well as being amazing value! We looked in to the photographers and the videographers available and we were sold! All we had to do then was pick the date. As we were keeping it a secret, we agreed we needed to do it sooner rather than later as we aren’t the best at keeping exciting things a secret haha. “

The marriage ceremony took place under a rustic pergola on the banks of the small dam and was conducted by the amazing Monty from Holy Matrimony. It had everything a good ceremony needs. A bit of laughter, a few tears and just lots of real emotion. They said their personal vows to each other and it was just perfect!

“The ceremony was incredible. It felt so surreal. We never really had a picture of how our ceremony was going to be and now looking back, I couldn’t imagine it any other way. With it just being the two of us, it felt so special and love was definitely in the air. It was short and sweet, emotional and funny. It was so personalised that it felt like we were surrounded by our family and friends.”

When choosing an elopement venue, most people would naturally choose a venue that has a beautiful location for the ceremony. But I think it is important to also choose a place that has beautiful photography locations so you can get those amazing wedding and elopement pictures. And Goosewing Cottage has both in abundance.

Nothing every goes 100% perfect at a wedding or elopement. And this elopement was no exception. This mishap was a pretty good one…

“Damien forgot his wedding attire!! If we were in the middle of a big wedding, I would of definitely been stressing. As we were so relaxed, I found it funny more than anything. He had to quickly drive to Cessnock Target and get a white shirt. Luckily he remembered his blazer, shoes and tie and he had a nice pair of black jeans with him. He also dropped the wedding ring when we were exchanging vows and I laughed and said ‘you can’t buy that in Target!’.”

“Everyone always says how getting married is one of the most stressful things in life, but we can honestly say that those people are wrong when you do it the right way!”

The best thing about eloping for Beth & Damien was…

“How easy and intimate it was! It’s probably the most romantic thing we have ever done.”

“It’s all about the two of you so enjoy every single minute. Just go with the flow and go with what feels right for you both 🙂 “

Beth and Damien strolled through the countryside with horses and cows around them, while drinking champagne and having an awesome time. This is what eloping is all about. A wonderful couple in a beautiful location celebrating their marriage and love together.

It was a day and elopement that was completely about them and the amazing commitment they made to each other. It doesn’t get any more intimate and beautiful than that!

The amazing team behind this intimate Hunter Valley elopement:

Please check out this beautiful film of their day. By Aaron from Amico Films. 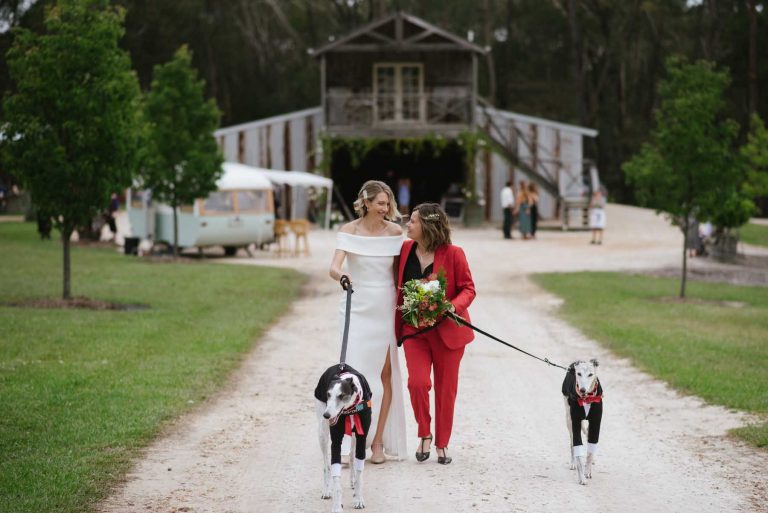 This is the gorgeous elopement/micro wedding of Di & Nic. A beautiful same-sex couple who are passionate about each other and their rescue dogs, Bear and Phoebe! The elopement photography was done by Rachel Gutierrez and the ceremony was conducted by the amazing Pauline Fawkner. This is how their love story began… “Nic and I… 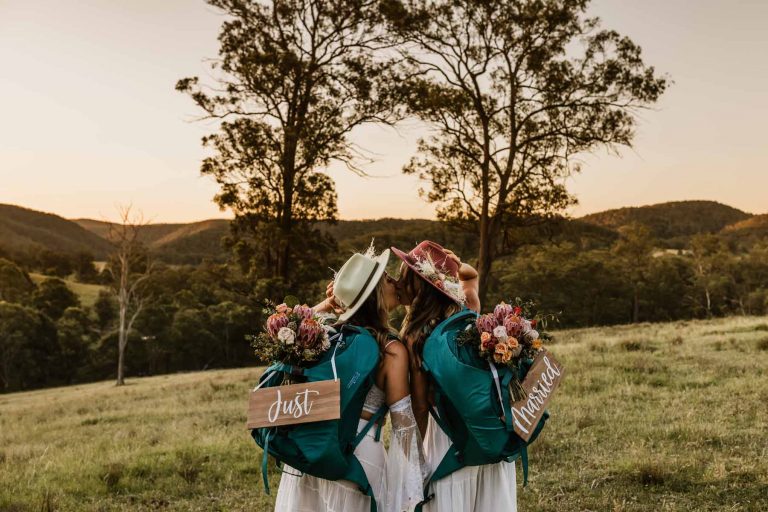 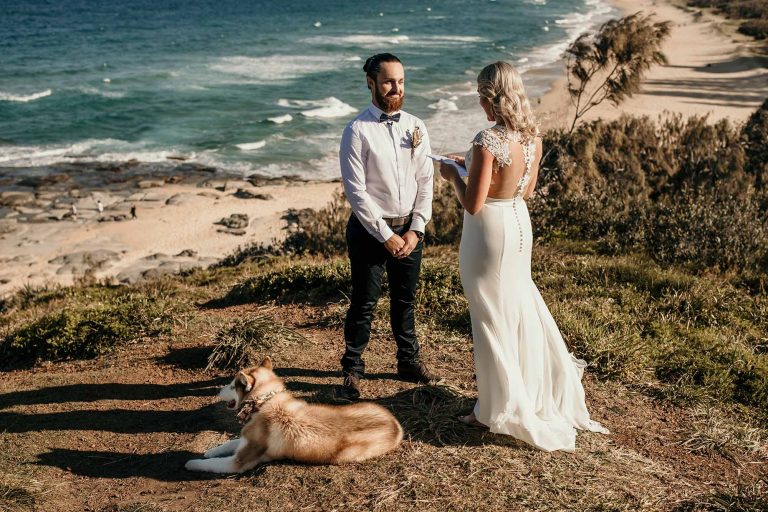 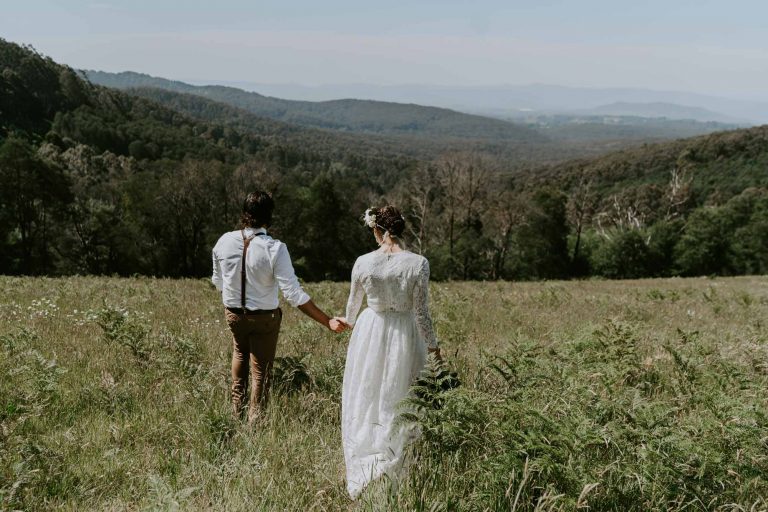 We love elopements and small weddings, so I am really excited to share this beautiful intimate Dandenong Ranges elopement of Aleksandra and Christian. This elopement was put together by the team at Elope Around Melbourne and features some beautiful professional photography by Emily Howlett Photography. It took place at R.J Hamer Arboretum in the little… 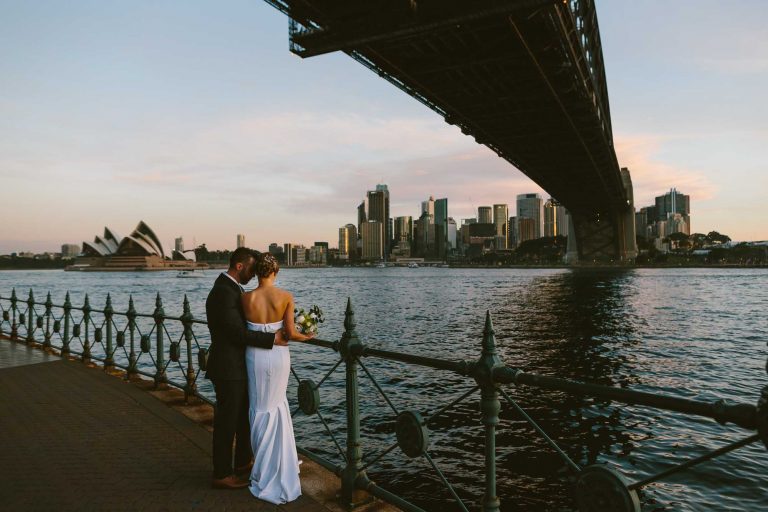 We are very excited to share this beautiful intimate Sydney elopement with you. It was photographed by Cavanagh Photography and took place on the North Sydney side of the city. Kirsty & Matt just wanted a very simple and no fuss marriage ceremony in Sydney with just their very closest family and friends. They had… 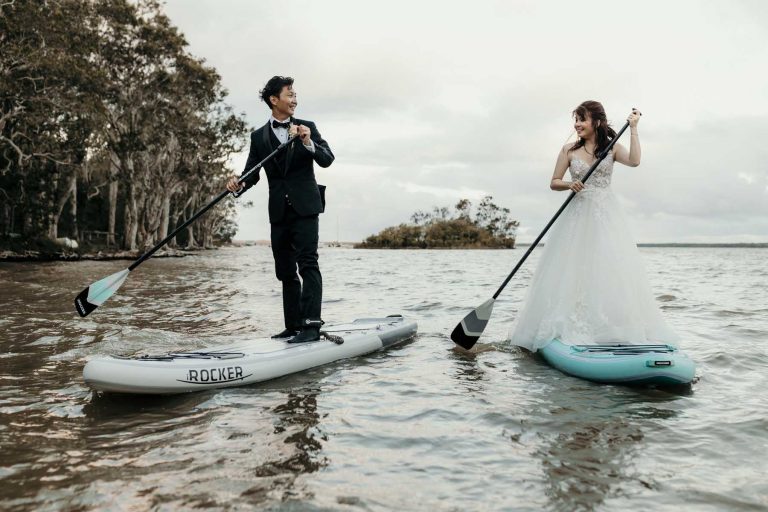 We are very excited to share Susanna & Eric’s stunning Noosa elopement with you which was photographed by the amazingly talented, Jekka from Naturally Jek Photography. The ceremony was conducted by the equally amazing, Danielle from Your Story Celebrant. This elopement took place at Boreen Point in Queensland as was suggested by Jek because this…